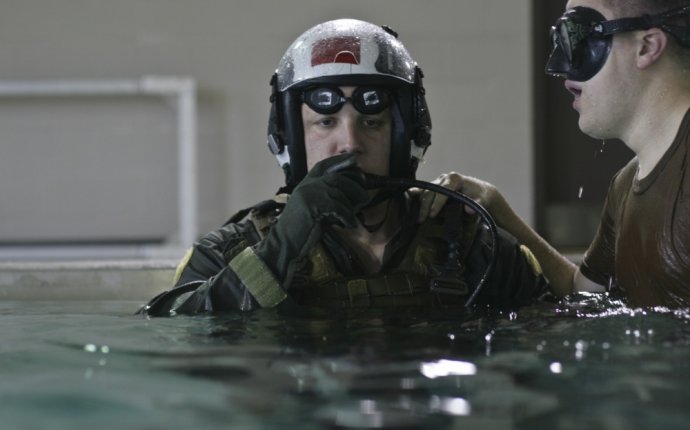 When Navy aircrew get notification to receive training at the NAS Jacksonville Aviation Survival Training Center (ASTC), they are warned that training is “high risk.” While that statement is true, the two-day training is designed to help keep them alive in case of an emergency.

“The training at our center covers everything from stress to nutrition, ” said Lt. John Sweeney.

ASTC training is required for all pilots, aircrew and civilians who might have a need to fly in a Naval or Marine aircraft, to include the occasional actor. The physiology training takes a look at how the body reacts to flight. Class 1 aviators are Navy jet aircrew, and some parts of the training are detailed towards their specific needs within the aircraft, including the body’s reaction to G forces.

“Our training is evolving to update to the needs of our students with new aircraft and changes to existing aircraft, ” Sweeney said.

There are eight ASTC sites in the U.S. that conduct the same training for Naval and Marine aviators.

However, the center conducts additional classes that are available to all branches and specialties of the military to include Navy SEALs, Marine RECON, Army Rangers and other Special Forces. The survival portion of the training course covers not only what occurs in the water, but also surviving in all environments. A medical simulation is set up for training in arctic, jungle and desert conditions. All different types of aviation life support systems are on display with items that are recommended for use in survival conditions.

According to Lt. Daniel Logsdon, ASTC Jax assistant director, hypoxia awareness is another vital part of training due to the reduced pressures at high altitudes. As well, decompression sickness is a serious concern in aviation.

The first day of class includes a hypoxia training device that simulates the effects of high altitude, ejection seat and virtual reality parachute training, and a parachute landing fall area where aircrews practice avoiding injury during a parachute landing.

The second day of class is primarily spent in the pool at the center. Training scenarios take place in a large swimming pool with aircraft egress trainers for teaching basic water survival. One of the final parts of training includes the 9D6 underwater egress trainer – commonly known as the “dunker” – that simulates an aircraft ditching into a body of water and sinking upside-down. It allows aircrew to practice escaping from a submerged fuselage. Seats, windows and hatches are configured to simulate actual aircraft, such as the H-60 Seahawk helicopter.

“The most difficult part of the course for me is having to tread water for so long in the pool with all the gear on, ” said Lt. Robert Mills, Helicopter Maritime Strike Squadron 48.