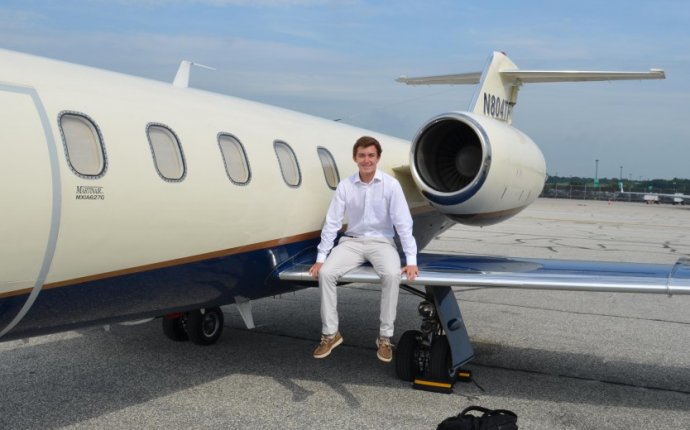 How to become a charter pilot?

My day started at 5:30 AM on a cloudy Tuesday morning. I was going flying, but not on a big passenger jet. Instead, I would be flying in the right seat of a Cessna 303 Crusader. My dad and two of his co-workers chartered the 303, registered as N2268C, to visit several real estate properties they were working on.

My dad, one of his co-workers, and I arrived at Appleton International Airport (ATW). Our flight was departing out of Platinum Aviation, the new operator at ATW. I had only been in this operator’s center once before, so before we left I made sure to walk around a little bit. Platinum Aviation’s building is only a few years old and has a very modern look and feel to it, and easily one of the nicest fixed-base operators (FBO) I have been in.

At 7:00am our airplane taxied to the FBO from its hanger on the other side of the airfield. Our pilot, Pat, came in to greet us and walk us out to the plane. I got in first and sat down in the right seat of the cockpit. The 303 only needs one pilot as long as there is a functioning autopilot. Within 5 minutes of getting on the airplane we were taking off on Runway 3 at Appleton and heading north to Green Bay (GRB) to pick up the last passenger.

The flight up to Green Bay was very short. We did not get above 3000 feet and were only cruising for 3 or 4 minutes before we started our descent. During our jaunt up to Green Bay, Pat told me a little bit about the Cessna 303. The 303 cruises at 180 knots which isn’t too bad for an aircraft this small. While descending a pilot can start adding flaps at 175 knots, and usually attempts to put the gear down at 150 knots. We were on approach to Runway 6 at Green Bay and we were still at cruise speed until we reached the outer marker of the instrument landing system (ILS). When we hit the marker, Pat began using his flaps at 10 degrees and quickly put the gear down. We slowed down fast and dropped towards the runway. We went from 180 knots, 5 miles out, to 110 knots 3 miles out, and shortly thereafter safely landed.

After an eventful approach into Green Bay, we picked up our last passenger and we were off to Superior Richard I Bong Airport (SUW).

After 30 minutes of a rather boring flight, we began to pick up some turbulence as we were heading northwest. A weather system was moving in from Canada and would cause us a little bit of trouble throughout the day. We eventually had to descend from 8000 feet to 6000 feet because the turbulence was getting to be too difficult for the small aircraft.

After descending to 6000 feet, the rest of the flight was very smooth. Approaching Superior, the weather was poor but the clouds lifted enough for us to fly a visual approach to runway 14. Runway 14 is only 4000 feet long and 75 feet wide, so coupled with the crosswind we had that day, it made for a fun landing for Pat as he safely touched down once again.

Upon landing my dad and his co-workers gone, leaving Pat and I with the pilot’s lounge all to ourselves at SUW. He showed me what the “Charter Pilot Breakfast” consisted of… some crackers, a banana, and a Diet Coke. While Pat ate his “breakfast, ” I set up my computer and surfed the web. After catching up on related aviation news online for just over an hour, my dad returned and we were back to the airplane for our next trip to Marquette, Michigan.

After Superior, my dad and his co-workers were traveling to Marquette, Michigan. The closest airport to Marquette is Sawyer International Airport (SAW). During the Cold War, SAW was used exclusively as an Air Force base. What made this field unique was that it was primarily used for B-52s. Because B-52s needed a lot of runway, officials constructed a 12, 300 foot long runway at Sawyer. This runway was heavily used, but now there is not nearly as much traffic. If anyone is flying around northern Wisconsin or the upper part of Michigan, I highly recommend stopping at Sawyer and doing at least a touch and go on the 12, 000 foot runway in the middle of nowhere. It is truly a one of a kind experience.

After a routine cruise over the Upper Peninsula of Michigan, we were approaching Sawyer International Airport. The aforementioned weather system was still giving us problems as we were on approach to SAW. The winds were almost due north at the surface, which normally wouldn’t be a problem because the runway at Sawyer is set up almost due North and South. However the ceiling was reported at only 800 feet, requiring the pilot to set up our flight for an instrument approach. Only Runway 1 at Sawyer has the ILS that is required for an instrument approach, so we would be landing with the wind at our back. While on a 3 mile final descent, the cloud layer vanished and we were able to fly the rest of the approach visually. After briefly discussing going around to land into the wind on Runway 19, Pat and I came to the conclusion that we should have enough runway to make it even with the tailwind. Our theory proved correct, and we landed safely once again.

After shutting down the plane and getting my dad on his way, Pat taught me one of the most important things for a charter pilot to know how to do… how to find a good place to eat lunch. We ended up going to a neighborhood bar and grill which had excellent burgers. Pat and I sat around and watched some sports games at the restaurant before returning back to the FBO at Sawyer International. The lounge at SAW was not as nice as the one at Superior, but it had WiFi and an outlet I could plug my laptop into so it served the purpose just fine.

After a little over 3 hours on the ground at Sawyer, we were back in the plane heading back to Green Bay. The weather system moved through northern Wisconsin and northern Michigan, and immediately began a dramatic shift in wind with it now blowing due south. This really helped our ground speed as we were able to pick up 15 minutes in the air.

Due to the time change between Michigan and Wisconsin, we landed at GRB at 3:55pm local time. After we dropped one passenger off, we were airborne once again and heading for home.

After another short flight to Appleton, and a great view of my house from above, my day came to an end. Another great landing by Pat to finish off the day, a short taxi over to the FBO, and my flying for the day was done.

Overall this experience taught me that the job of a charter pilot is not an easy one. Whether it is learning to work crazy hours, dealing with lackluster accommodations, or simply having to find new restaurants in small towns, charter pilots have to balance between being a flight attendant while still flying the airplane. A charter pilot isn’t as glamorized of a position as a commercial pilot, but some feel as though it is a great position. People such as Pat simply love to fly, and know that the experiences while flying a charter aircraft can only better prepare them for whatever their future may hold.

what tech companies are laying off who is engineering manager who business analyst how much company does a cat need which science major is the easiest where to buy business casual clothes how often can technological hazard happen how many science regents are required to graduate why device manager can't open which startup company is best where products are made how many entrepreneur are there how many system updates on galaxy s10 plus how much technology is used in schools when tech mahindra started when workers are asked to participate how manufacturer distribute their products what makes a good roadmap how many technology in the world whose project is manila international airport why solution is stable what business can i start with 10k where to solve python problems how much company car tax calculator how solution is formed which product requires an appraisal how much product to use skincare why science is my favorite subject who project pdf which device did you plug in where to design business cards how much solution for bissell carpet cleaner where to find entrepreneurs jira roadmap which version how teaching and learning relate to obe how equipment jackson where to products online how to roadmap a product how many teaching positions are open in florida why startups register in delaware when science and christianity meet how many tech workers in us where project adam was filmed how system bet works how much technology should a child use where technology and humanity cross how many company in dow jones who manufactures products how long london broil on grill how manager can motivate employees where engineer work when management doesn't listen how much london tube cost why entrepreneurs can't work for others how much science diet to feed puppy where from the worker alienation according to marx where to eat london where product definition where technology is going how much technology has china stolen why design matters book who devised the rhetorical strategies of persuasion who system thinking who owns positive solutions which device is required for the internet connection where do entrepreneurs work how farm equipment how many entrepreneurs fail how many entrepreneurs are there in the us when entrepreneurship is successful class 10 how tech savvy are you how much teaching english in thailand when management fails how many start up episodes which technology is used to adjust weegy how much business analyst make when entrepreneurship started how long startup how much science diet to feed puppy how many technology companies are there in the world whose science was first called psychology where to start startup why technology is bad how much product photography cost whose father was socrates why product management interview question how business works whose science is it essay how many products does coca cola produce globally what business to start how long management how far technology has advanced why solution is a homogeneous mixture how much engineering salary where london map how many management theories are there what is the difference between a roadmap and a timeline what is included in a roadmap why business analytics where science ends religion begins why science is important how many start up episodes whose immune system is weakened who products food which business development increases cash what start up business how much start up money for garage sale where is maya from project runway junior whom pronouns which science class is the easiest is it solution to or solution for how much workers comp do i get where technology started who is solutions architect for support on mdm whom to connect how many manufacturing companies in the uk how startup funding works how many product managers are there
Source: airlinegeeks.com