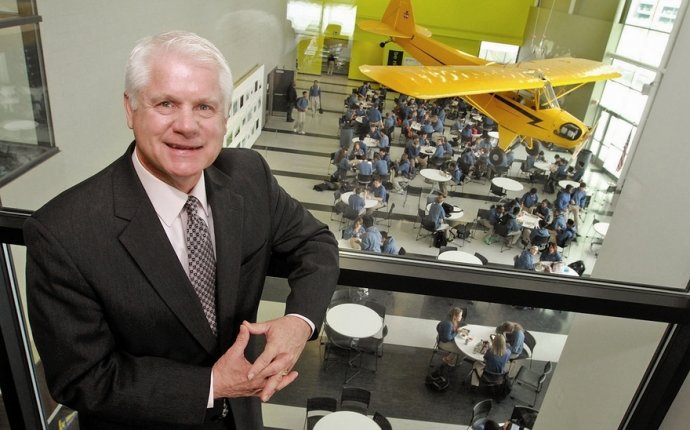 CASCADE TOWNSHIP, Mich. (AP) — A teenager grips the steering wheel and presses pedals. He sees wind-blown snow in front of him as he approaches the runway. A video game? No, George Radashaw is at a public charter school, simulating a flight in a Cessna airplane.

“I’ve always loved aviation, ” the 17 year-old said, keeping his eyes focused on panels of high-tech instruments. “It started at 3. I saw an airplane, and I wanted to fly them ever since.”

Radashaw is getting his wish at . It’s a unique public high school in western Michigan that was started in 2010 by Dick DeVos with much encouragement from his wife, Betsy DeVos, President-elect Donald Trump’s choice to head the U.S. Education Department, who will testify at a .

The nonprofit charter school has grown from 80 students in rundown office space at Gerald R. Ford International Airport to its own building with 600 students from seven counties. Some kids ride three public buses to get to the suburban airport. One teen stays with friends in the Grand Rapids area and commutes 150 miles to home on weekends. A public lottery is held each spring if applications exceed openings.

The school seems to fit Betsy DeVos’ philosophy about education and what she’s pledging to promote in Washington.

Betsy and Dick DeVos founded the Great Lakes Education Project, a school-choice advocacy organization that includes a political action committee. As part of Michigan’s bailout of the Detroit school district last year, the group and others with ties to the DeVos family successfully fought a proposal that would have created a commission to make decisions about opening schools, including publicly funded charters. It was blocked in the Republican-controlled Legislature.

“The answer isn’t bigger government, ” she said at a . “The answer is local control. It’s listening to parents — and it’s giving more choices.”

In the case of West Michigan Aviation, it also helps to have help. The school is tuition-free, just like other Michigan charter schools or traditional public schools. It operates with a per-student allowance from the state, which is roughly $7, 500 this year. But the DeVos couple also gave more than $7 million through 2014, according to family foundation tax records, including a $3 million no-interest loan to expand and equip the building.

“You need a benefactor. You need a supporter like Dick DeVos to do it, ” said Patrick Cwayna Sr., West Michigan Aviation’s chief executive.

Dick DeVos, a pilot and son of billionaire Amway co-founder Richard DeVos, said it’s vital to be at the airport.

“That was a desire of Betsy’s and mine. … We felt it was important that kids are reminded daily about the possibilities in life, ” he said. “Planes coming and going and people traveling to other parts of the world. Their futures could be a part of that.”

There are aviation classes in every grade, including history, plane maintenance, electronics and pilot instruction. The school has two Cessna 172 planes; one was donated by Delta Air Lines. Students who make a solo flight wear white shirts after reaching the milestone, standing out in a sea of kids in blue shirts.

Engineering also gets much attention, with classes in computer science, robotic systems and aerospace engineering. At the same time, there are traditional offerings of math, literature and foreign language. Not every student wants to become a pilot or even land in the aviation field.

“But if we get them inspired by looking at airplanes and slip them a high quality education while they’re not looking — all the better, right?” Dick DeVos said.

There have been three graduating classes so far. The average SAT score last spring for juniors was 1072, according to the state, higher than the statewide average and among the top 10 in the county.

“I’ve been blown away by what I’ve seen, ” said Alec Gallimore, dean of engineering at the University of Michigan, who has visited three or four times and been impressed by the diversity and work ethic.

Can West Michigan Aviation be replicated? Doug Harris, an economics professor at Tulane University who specializes in education, said specialty schools can be promising but some would have trouble sustaining themselves.

“The issue is less about whether they are niche schools and more about whether the educational themes and methods are expensive relative to more traditional approaches, ” said Harris, who has criticized Betsy DeVos’ nomination as education secretary. “An aviation school requires an unusual amount of physical capital and teachers who know how to fly planes. That’s clearly going to be more expensive than a traditional school.”

Julia Stevenson, 17, is the student who commutes about three hours on weekends between Grand Rapids and home in Traverse City. She wants to pursue aeronautical sciences in college.

How to mine Ethereum explained from Beaxy.com